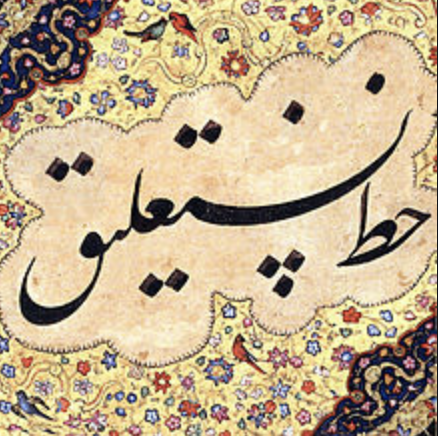 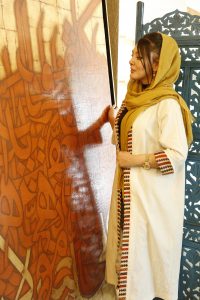 Persian Calligraphy ‘خوشنویسی ایرانی’ is one of the arts throughout Persian history and is an example of fine Persian culture.

Nastaliq ‘نستعلیق’ is a style of Islamic calligraphy formalized in the 14th century by the master calligrapher Mir ‘Ali Tabrizi, though its exact origins are unclear. 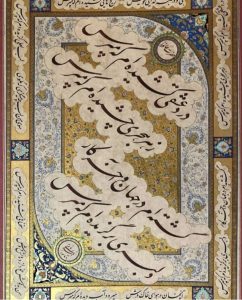 Nastaliq is characterized by a tendency to slope downward from right to left, and used mainly for Persian poetical writings and in Urdu and Malay manuscript. Unlike its ancestors, Nastaliq flows effortlessly and is characterized by natural curves. During the past 500 years, Nastaliq calligraphy has been one of the main Iranian script styles used in writing the Perso-Arabic script.

In the 17th century, a new genre called cursive Nastaliq shekasteh ‘نستعلیق شکسته’ was created. This style is based on the same rules as Nastaliq, but it provides more flexible movement. It is more stretched and curved in comparison.The name indicates the combination of elements of two predating styles, ‘Naskh’ and ‘Ta’liq’.

ainly for Persian poetical writings and in Urdu and Malay manuscript. Unlike its ancestors, Nastaliq flows effortlessly and is characterized by natural curves. During the past 500 years, Nastaliq calligraphy has been one of the main Iranian script styles used in writing the Perso-

The Persian script is the same as Arabic, written from right to left, but with the addition of four extra characters. The general trajectory of the Nastaliq script slopes from top to bottom. This is of particular significance as there is no fixed level or height for any character. The ‘Ta’liq’ element, meaning ‘hanging’ in Arabic, points to this style’s highly cursive nature, where the characters’ strokes literally ‘hang’ from the imagined horizontal line.

The nature of the Persian and Arabic scripts means that each character usually takes a different shape depending on whether it is at the beginning, middle, or end of a word. The Nastaliq style of writing is even more context-specific, and the shape of a character may be altered depending on the 4th or 5th preceding character of the word.

The thousands of ligatures, or character combinations (the Persian script has 32 characters), all have rules that frame the Nastaliq practice. The arduous task of memorizing these rules makes this style particularly difficult for students to master. However, they also provide the calligrapher with ample space for interpretation and creativity.Today, however, it is used in countless media and is an ever-changing craft.

Nastaliq is the core script of the post-Sassanid Persian writing tradition and is equally important in the areas under its cultural influence. The languages of Iran, Afghanistan, India, Pakistan and the Turkic Uyghur language of the Chinese province of Xinjiang, rely on Nastaliq.

Nastaliq calligraphy is regarded by many practitioners as the most beautiful script, so much so that it has informally been given the title of “The Bride of Calligraphy”.

How to convert your typing to Nastaliq?

Here is a great resource to convert your typing to Nastaliq. First, type your text or copy paste the passage. Then change the method ‘شیوه’ to Nastaliq ‘نستعلیق’ and click on Calligraphy ‘خطاطی کن’. 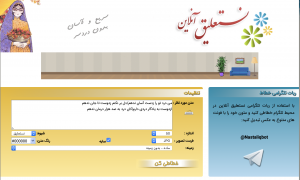